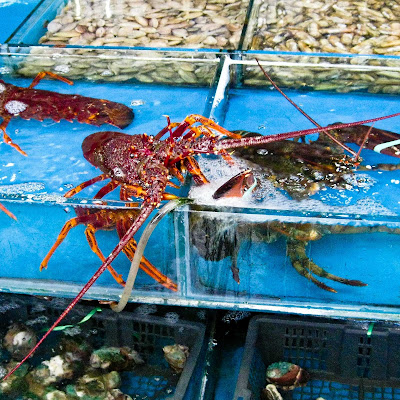 How would you feel about choosing your dinner while it’s still alive? For me, it sort of goes against some deeply held moral food principle to point out exactly which creature I’d like to have killed for my supper. But when I seriously, seriously ask myself whether I feel less guilt about eating a critter that someone else has chosen before killing it on my behalf, the whole moral house of cards comes tumbling down. I mean, really, it’s ridiculous logic.
In China, I’m rapidly learning that interest in food and eating extends to the diner’s ability to choose, with some degree of expertise, the protein component of their main course. At Shanghai’s Tongchuan Lu Seafood Market this is exactly what happens every single day. The market is primarily a wholesale fish and seafood market for restaurants and hotels, but
they run an excellent sideline in personal shopping too – walk the stalls, choose some seafood, then take it to one of the local restaurants where they can cook it to order for you – freshness guaranteed.
Tongchuan Lu is way out in Putuo District, north Shanghai, in the midst of non-descript streets and mid-level apartment blocks. Stepping out of the taxi you immediately know exactly where you’ve alighted as a strong briny smell with an overlay of fishiness reaches your nose. The open air section of the market stretches out on both sides of the road, and as far as you can see there are rows, and rows, and more rows of tanks bubbling with oxygen and holding every imaginable edible sea creature. Behind the street-front stalls is a larger indoor market, with air-conditioning and freezers where most of the jellyfish and frozen fish can be found.
There is nothing that lives in the seas around the world that can’t be found here – crabs from Canada, lobsters from Australia, razor clams from the Philipines, salmon from Norway, abalone from South Australia, shrimp from Taiwan, and so on. There are sea urchins, sea cucumbers, sea snakes, oysters, clams, cockles, periwinkles, tiger prawns, pipi prawns, hairy crabs, white crabs, mud crabs, jellyfish, sharks fins and octopus. Plus lots of things I can’t identify and I’m relying on my knowledgeable marine biologist brother and sister-in-law to name for me. 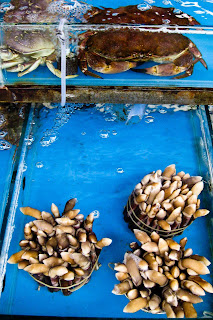 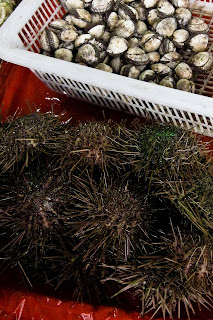 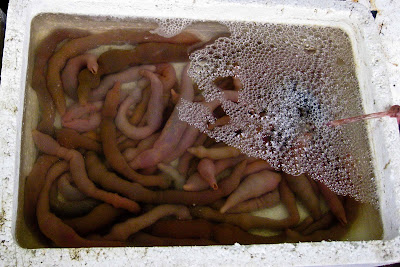 They’re moving and squirming, and I’m assured they’re good to eat. But what are they? And am I the only one who thinks they look like double-ended penises? 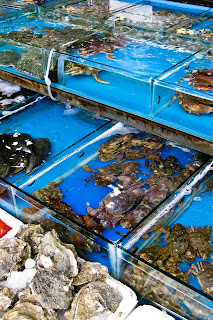 What are these on the left for example? They look like giant mollusc tongues. 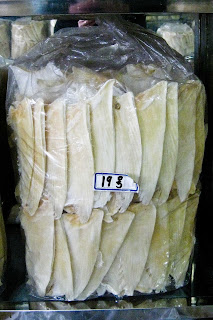 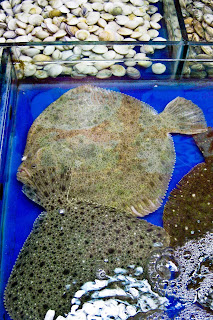 An entire shop full of nothing but dried shark fins. I have tasted sharks fin, but I don’t understand the attraction (to be honest) of the gelatinous fibres it dissolves into once cooked. The plaice on the right can be seen below with soy sauce. 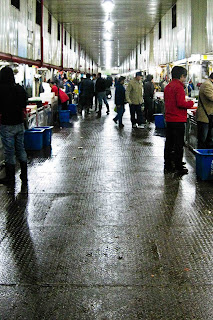 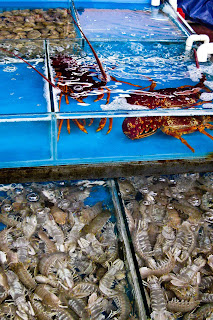 The fishmongers at Tongchuan Lu are a very friendly bunch, helping us identify what might be nice to eat, and suggesting ways to cook it. 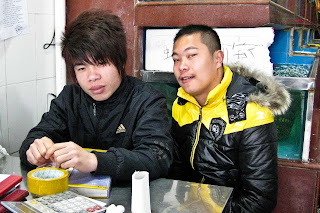 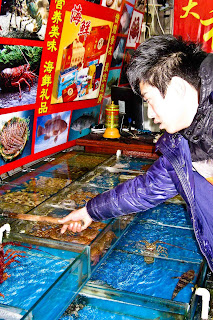 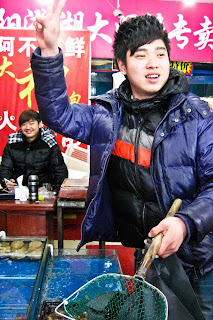 Once we decided on a stall with reasonable prices and healthy looking seafood we made our selection. Two whole plaice went flapping straight into a large red plastic bag, followed by 2 jin (1kg) of pipi prawns (scampi) and 1 jin of clams. A further jin of tiny fingernail clams was thrown in for free by our cheerful fishmonger, happy to have the first sale of the day.
He then took us three doors down to the restaurant to have the whole lot cooked, at the ridiculous price of 13 yuan ($2) per 500g. The plastic bags were handed over and some rapid-fire discussions between our fishmonger and the wait staff followed, after the pictureless Chinese menu proved to be a barrier for all of us.
It became clear that the staff had decided themselves how our seafood should be cooked, and a fruitless discussion about whether we could have the clams with chili and blackbean was vetoed by the kitchen staff on the grounds that we didn’t know what we were talking about. They were right – the clams arrived sweet and creamy and perfectly cooked – gently steamed open and flavoured with ginger and chili, which didn’t overpower the delicate flavour of the clams as black bean might have done.  The tiny clams followed, cooked with soy, shaoxing wine and a touch of sugar, chili and ginger. Divine. So small they were almost impossible to eat with chopsticks, they were an exercise in patience and perseverance. 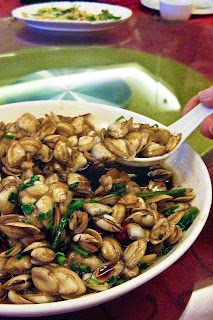 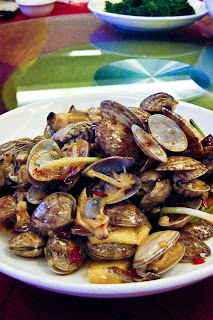 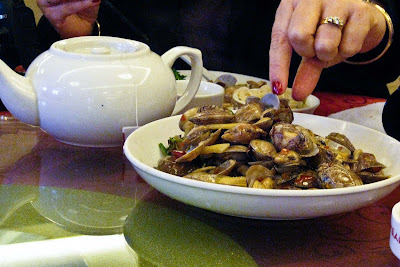 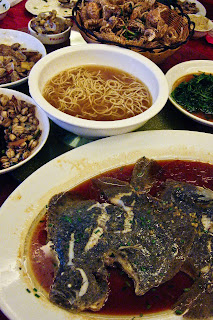 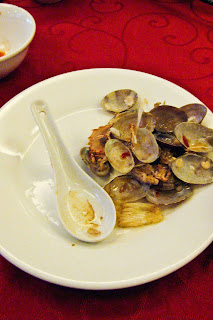 The pipi prawns were flash-fried with salt and pepper coating – crunchy, papery shells giving way to firm white flesh. Delicious. The entire kilo was gone in about five minutes flat. And lastly the plaice were steamed and dressed with a soy and ginger glaze, a perfect way to preserve the delicate fresh flavour of the fish. The four seafood dishes, plus noodles and two vegetable dishes, rice and tea, came to an unbelievable 170 yuan ($25) for six people.
While hunting for our lunch I had spotted a very atractive looking piece of salmon in one of the stalls, and at 70 yuan a kilo ($12) it was too good to pass up. On top of an old styrofoam box, positioned next to a dirty old bucket, the fishmonger used the sharpest cleaver I’ve ever seen to cut and trim the salmon into four manageable pieces. I ate it for dinner tonight, pan fried skin side down with oven roasted herbed cherry tomatoes, potatoes with capers, and asparagus.  Fantastic. I look forward to going back to get some more next time.
(Just an aside – if you do go, wear old shoes) 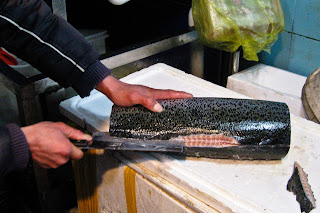 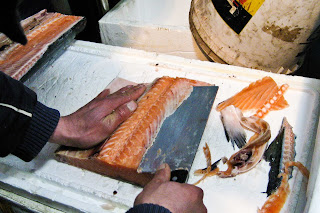 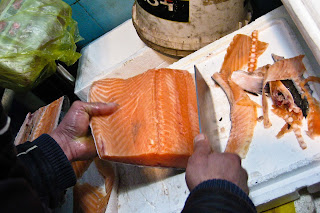 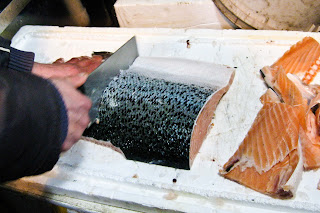 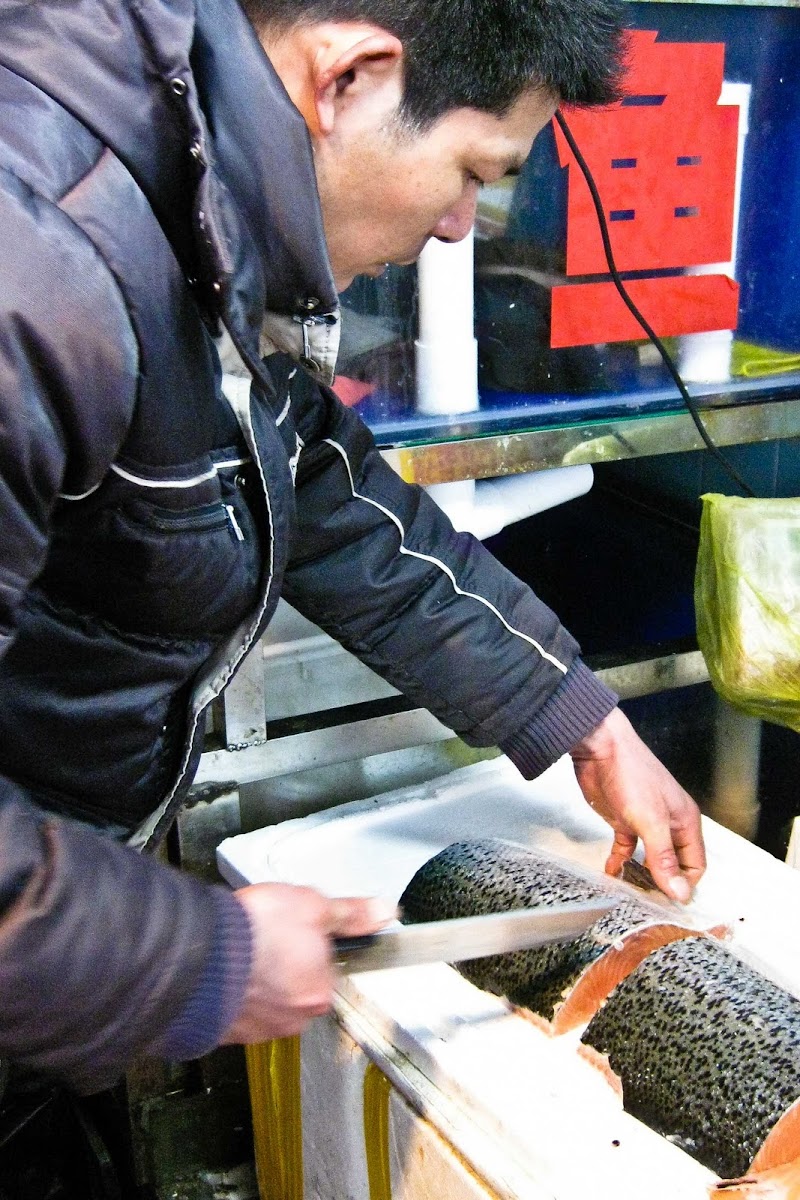