Here’s Tuesday’s post, only five days late, coming at you loud and clear from inside the PRC! 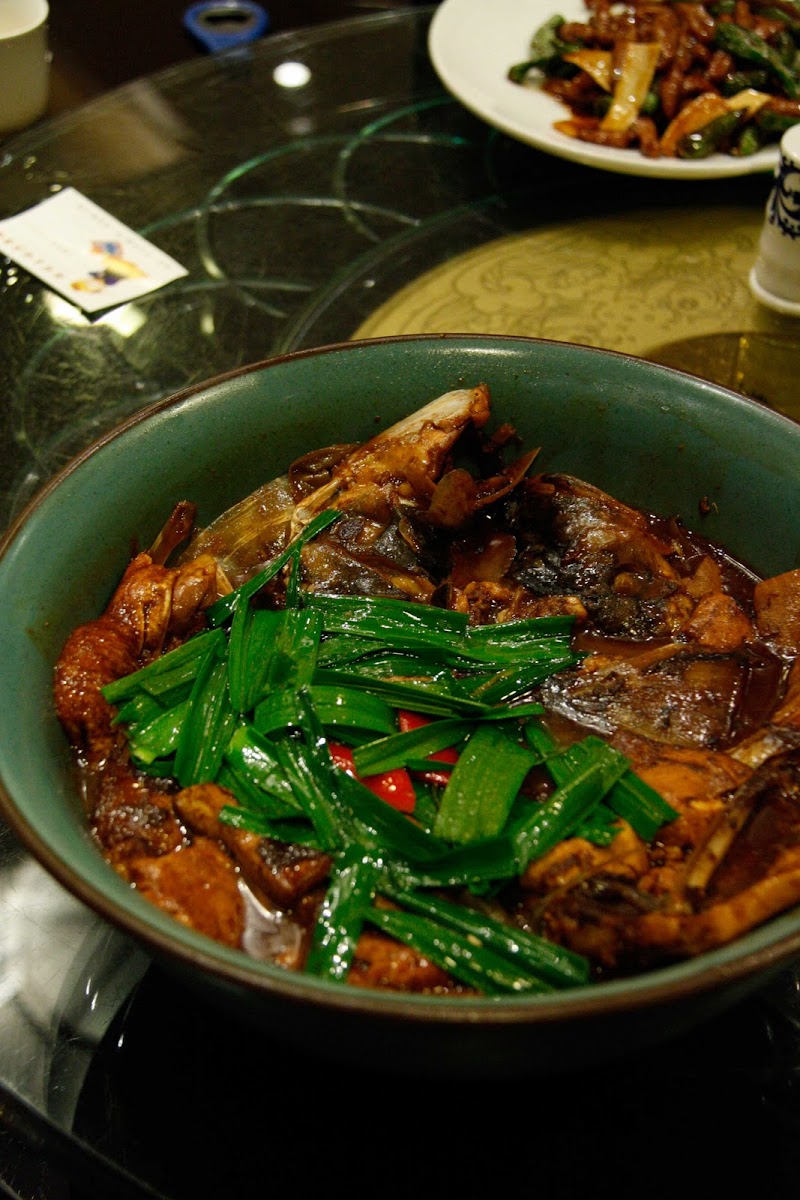 Today is another great Hangzhou local specialty dish with another great story behind it. Hangzhou’s night market, on Hefang Gu Jie, is a long pedestrian street lined on both sides with tea shops, food stalls, a famous Chinese medicine house lined to the rafters with drawers full of dried exotics, and craftspeople blowing glass, making instruments and carving horn. It has a great buzz and on previous visits to Hangzhou we’ve always eaten at the adjoining open-air food market where you can choose from Beggar’s Chicken, sticky rice wrapped in lotus leaves, duck heads, frogs with chili, spiced crabs on a stick, or other local specialties. But when we visited on Saturday night it was pouring with rain, muddy and cold, and sitting outside trying to eat while cold rain water trickled down the back of your neck seemed like miserable way to spend a Saturday night.

Instead, we stepped through into the welcoming warmth and good smells of the ancient restaurant of Wangrunxing. 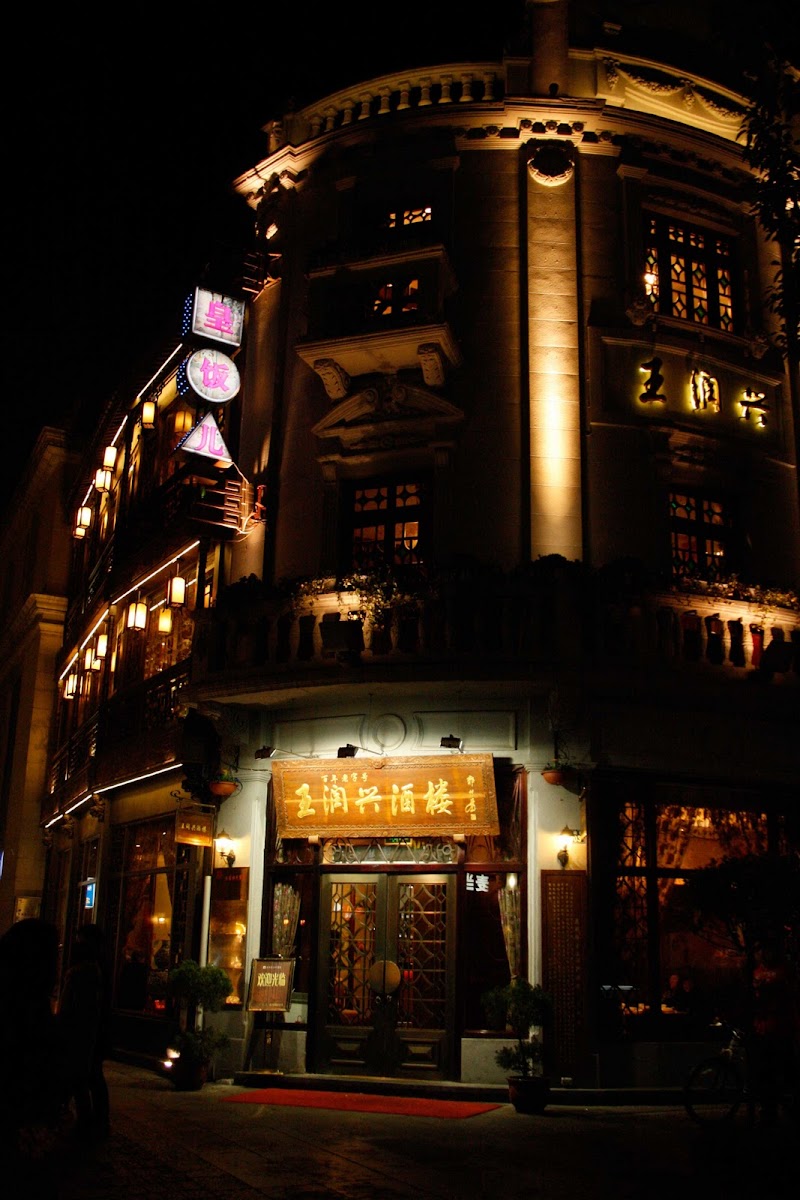 Their house specialty is fish head braised with tofu – ‘Fish Head for Emperor Qianlong’ (Qianlong Yu Tou). Now for the rest of my family, the combination of ‘fish head’ and ‘tofu’ together in the description of any dish would be enough to send them straight for the fried rice, so I just didn’t tell them I ordered it, and waited for the grumbles of agony and eye-rolling to begin when the bowl full of steaming fish heads arrived.


In Chinese restaurants you usually receive only a single menu, whether there are two or ten of you, it being generally agreed that only one person in the party should order so that the correct combination and balance of dishes is achieved without the influence of dissenting palates. It’s a type of culinary dictatorship. It’s usually left to me, because I’m the bossiest, I’m also the most interested in what we eat, and my restaurant Chinese is getting pretty passable. The days of strange plates of gelatinous unmentionables arriving to our table – tripe, tendon, jellyfish, and pig skin, are long gone. Now I can ask what’s in a dish, and how it’s cooked, it saves on a lot of surprises.

Back to the fish-head soup. The tale of its fame is set against the backdrop of the Qing Dynasty, about three hundred years ago, with Emperor Qianlong wandering the craggy Wu Hill alone during a visit to Hangzhou. Caught alone in a heavy rainstorm, and without provisions, he knocked on the door of a simple cottage nearby to ask for shelter and a meal. The house belonged to Axing, a poor clerk working at a local restaurant in Hangzhou, and having little else to offer, cooked the Emperor a dish of braised fish head with tofu. The Emperor was so delighted with the taste he returned on his next visit to Hangzhou, giving Axing enough money to open a restaurant, and returned several years later to eat the dish again and reminisce about his previous visit. This time, he gave Axing no money, but bestowed the name ‘Wangrunxing’ to the restaurant, meaning ‘The Emperor’s meal’.


Predictably, there were groans and a lot of eye-rolling when the huge celadon-green bowl of fish heads arrived, garnished with bright green scallion-tops. The aroma of the soup was rich and inviting – five-spice, dark soy sauce, fermented soy beans and garlic with a touch of ginger. The taste was deep and complex, with the rich ingredients of the broth complementing the soft pillows of braised tofu and the small pieces of tender fresh fish. The bottom of the bowl revealed star-anise and tiny salty slices of the local cured ham.  Although the younger family members weren’t immediately won over, everyone else managed to get past their fish-head squeamishness and were all surprised to find it as delicious as it smelled. That Emperor obviously had good taste. 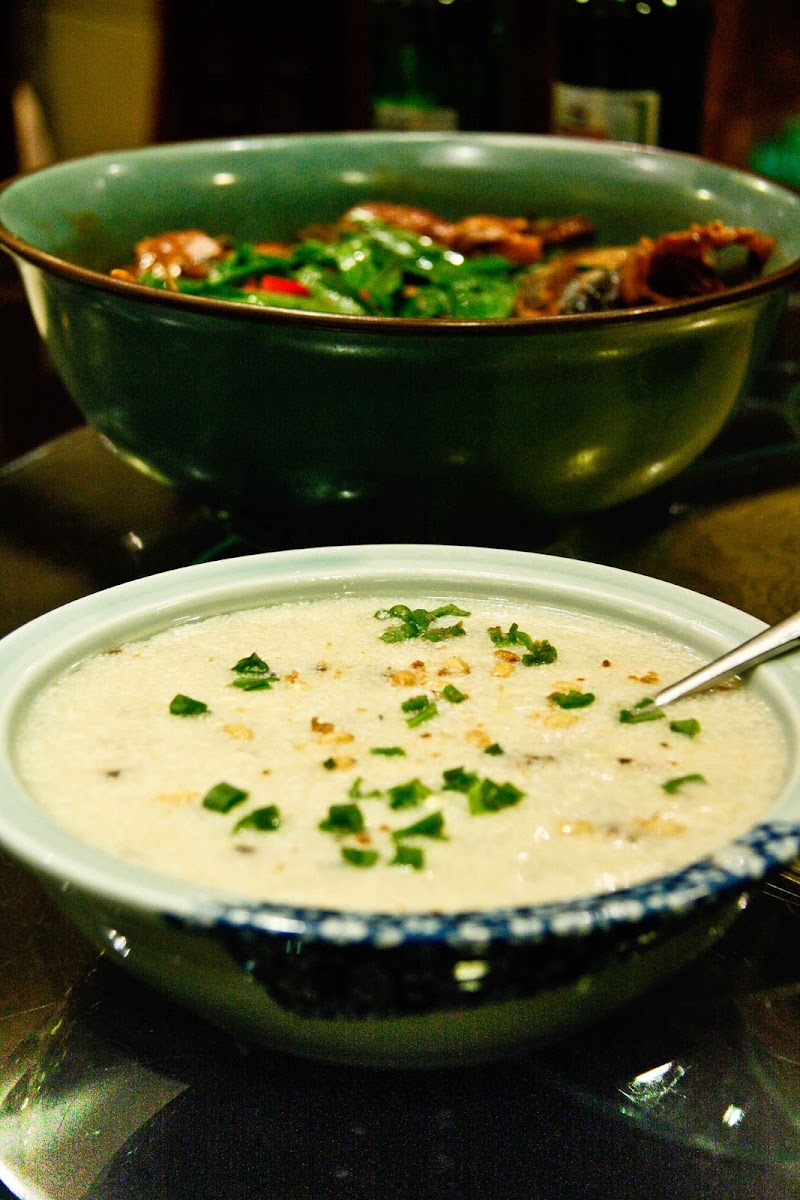 The other signature dish of Wangrunxing we tried was ‘Eight Treasure Bean Curd for Satrap Wang’. Another long story involving a different Emperor and a stolen recipe, but also delicious – I could only identify five of the soup’s eight treasures: pine nuts, pork, dried scallops, scallions and ginger, flecked through a thick gelatinous broth made from pureed silken tofu and stock.
We had an incredible meal, rounded out with fresh soy beans with local ham, and celery stir-fried with lily bulbs; made all the richer by the wonderful stories behind the food. I can’t wait to get back to Hangzhou to try them again.
Wangrunxing Restaurant
101-103 Hefang Jie, near Zhongshan Zhong Lu, Hangzhou
河坊街101-103号 (近中山中路)
Open 7 days for lunch and dinner